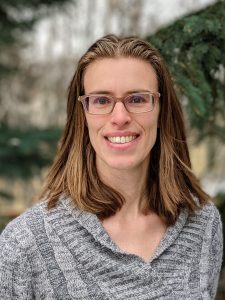 Dr. Miranda Smit recently joined the Prairie Swine Centre as Assistant Manager – Knowledge Transfer and will be an integral part of the Centre’s Knowledge Transfer team.  Miranda’s background allows her to tackle the different research and extension projects head on.

Miranda was born and raised in the Netherlands, where she studied Animal Science (B.Sc. and M.Sc.) at the Wageningen University, also spending a year in France where she obtained a second M.Sc. degree in Agriculture. Miranda’s story of how she ended up in Canada and in the pork industry are connected to each other. While working on her Master’s degree in The Netherlands, she asked her supervisor to find an exchange student opportunity for her in Canada, as she had always dreamed of going there. Her supervisor, being a swine researcher himself, got her in touch with George Foxcroft at the University of Alberta and in 2006 she spent 4 months in Edmonton studying fetal programming.

After finishing her Master’s degree, she returned in 2007 to the University of Alberta to work as research technician at the Swine Research and Technology Centre (SRTC), during this time fell in love with pigs and Canada. She returned in 2008 to start her PhD. in pig reproduction under the  supervision of George Foxcroft. Her thesis focused on feeding omega-3 fatty acids to sows, as well as effects of low litter birth weight on postnatal growth performance. Since graduation she was employed with Alberta Agriculture and Eduardo Beltranena in the Monogastric Feed Research Group. During her time with Alberta Agriculture she wrote numerous magazine and journal articles on feeding alternative ingredients or low energy diets to nursery and grow-finish pigs. She also produced a wide variety of posters, abstracts, factsheets, radio interviews and presentations about her work.

In her off-time, Miranda enjoys hiking in the mountains, riding horses, dancing, traveling near and far, and learning new languages (currently working on Spanish).