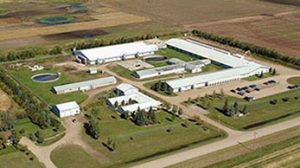 Prairie Swine Centre was originally built in 1980 by the University of Saskatchewan, and served as their swine research and teaching facility. At that time, the Centre consisted of two 100-sow and one 50-sow unit, each with its own gestation, and weanlings area, a small 240 head feeder barn and a small office/service building.

In 1987, the University of Saskatchewan and the Saskatchewan Hog Marketing Commission joined forces to review the operations and function of Prairie Swine Centre. An advisory board of industry representatives identified the need for increased emphasis on grower-finisher research and the need to work more closely with the commercial pork industry.

In 1991, Prairie Swine Centre was formed as a non-profit corporation with its own budget, Board of Directors, mandate and operational system.  During this change, Prairie Swine Centre began the ambitious development of both its research and office facilities.  The early financial commitment from the province’s pork producers to help fund the research program was critical to the renewal of the Centre.  Shortly after, the federal government, through the Western Economic Diversification Program – and provincial government through the Agricultural Development Fund, added their support to that of the producers and the dream became reality. 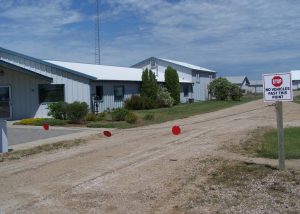 Maintaining research facilities that have the capability to meet industry needs is at the core of Prairie Swine Centre’s mandate to serve the industry with near-market research information. In 2006 a review of the 300 sow farrow and gestation facilities at Floral resulted in an application for funding to the province of Saskatchewan.

A significant effort by Saskatchewan Agriculture and Food to replace the ageing 1980 barns was developed with the Federal government and the result is a shared federal/provincial grant for the renovation of the gestation, breeding and farrowing facilities. The resulting sow facility allows PSC to accomplish several objectives. Firstly, the old facility was challenged to meet the current standards of animal care expected of a research farm. Secondly the construction of the new barn reduced the operating costs of the farm through improvements in energy efficiency and labour. 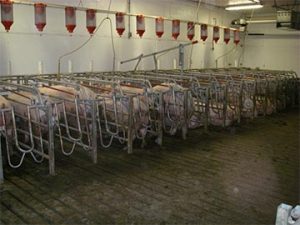 To address identified research needs the barn was designed to allow key elements like group size, space per sow, and feeding for stage of gestation and parity questions to be investigated. This resulted in the gestation portion of the barn incorporating additional space to replicate the various scenarios that might be seen on a commercial farm. To do this the basic gestation barn consists of six large pens each of which accommodate two weeks of breedings. Each of these two-week breeding groups will be housed in two rows of lock-in stalls separated by a shared slatted area of 10 feet. In addition, a solid floor area will form a ‘T’ on the end of the shared slatted area. This design allows the most popular systems to be tested, including standard 24 inch gestation stalls, walk-in lock-in stalls for group housing, replicating a cafeteria feeding system moving sows daily from a non-feeding group pen into the walk-in stall, and floor feeding in groups. This design also allows the maximum flexibility to test space requirements under different scenarios and the effect that may have on animal behaviour.