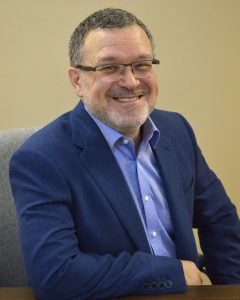 Dr. Murray Pettitt has been appointed as the new CEO of Prairie Swine Centre as of July 1, 2018. Murray has been part of the swine research community for the past 19 years, and was previously employed at Prairie Swine Centre (PSC) for 10 years, managing Contract Research from 2003-2009. During that time he grew the program’s size and capabilities, while being responsible for the business development as well as the design and implementation of customer-driven research.

Murray is from rural Manitoba and received his BSA in 1986 and his M.Sc. in animal reproduction in 1991 from the University of Manitoba.  After three years at the Winnipeg Health Sciences Centre, he returned to agriculture to pursue research in boar sperm cryopreservation at the University of Guelph, receiving his Ph.D. in 1997. Murray then accepted a post-doctoral fellowship at the Ontario Veterinary College where he helped develop practical embryo transfer techniques in swine.

In 1999, he assumed the position of Assistant Manager – External Research Services (also known as Contract Research) at PSC. Subsequently he became the Research Scientist – External Research Services from 2003 – 2009 where he was responsible for leading this program conducting confidential, proprietary contract research on behalf of corporations, associations or individuals in the swine industry in a professional, business environment.

Since leaving PSC, Murray has been at the Department of Animal and Poultry Science at the University of Saskatchewan where he was responsible for managing a research program investigating markers of sperm function to identify the fertility potential of boars and bulls.

“It is like coming home – to be able to return to the Centre after 9 years pursuing my research interests in my area of specialization” notes Murray. “The position of CEO will enable me to further my interests in bringing science to agriculture, further strengthen our relationships with the pork industry and other researchers, and develop new relationships and collaborations in order to add to the long, successful history of Prairie Swine Centre’s service to the pork industry”.