Articles in the Fall 2017 Canadian Hog Journal Include: 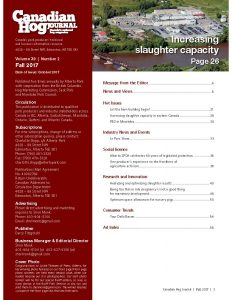 Research and Innovation: Analyzing and Optimizing Slaughter Results, Being too Thin in Late Pregnancy is not a Good Thing for Mammary Development, Optimum Space Allowances for Nursery Pigs