Articles in the Banff 2016 Western Hog Journal include: 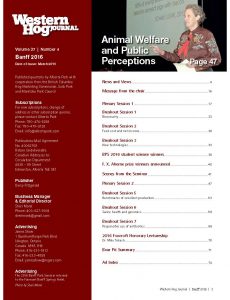 Biosecurity: Canada’s Response to PED and What is Next for Emerging Disease Strategy, Biosecurity and Disease Risk Management in Transportation

Proper gilt development ensures the gilt remains in the herd and meets their full potential. Factors to consider include health, selection, housing, puberty induction and diet.

Measuring the Prevalence of Antimicrobial Resistance and Pathogens