Articles in the October 2016 Better Pork Include: 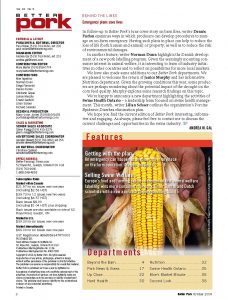 Beyond the Barn: Brewing a New Use for Pork, Canadian-Produced PED Vaccine in the Works, Social (Ag)Media: How to Cook Your Pork and Connect with Consumers, Getting With the Plan, Selling Swine Welfare

Up Close: Education Goes Hand-in-Hand with Farming for this Clarington Couple