Articles in the February 2017 Better Pork Include: 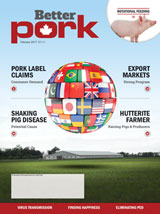 Beyond the Barn: Importing Viruses via Feed, Shopping for Bacon in Virtual Reality, Canadian Pork Industry Hoping TPP Won’t be DOA (Dead on Arrival), Label Claims for the 98%

Herd Health: A New Pestivirus Identified as a Cause of Congenital Tremors

Nutrition: Balancing the Benefits of Pellet Feeding with the Health of Grower-Finisher Pigs

Swine Health Ontario: To Eliminate or Not to Eliminate