Articles in the October 2017 Better Pork Include: 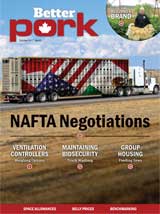 Beyond the Barn: Pork Barns See Revised Regulations, PRRS 2.0: A Strain on Producers, Research to Create a Valuable Tool

The Rise of Ventilation Controllers

Up Close: Growing a Brand in Nova Scotia

Swine Health Ontario: The Role of Transport in Biosecurity

Second Look: Why Doesn’t the Stomach Digest Itself?