Articles in the April 2018 Better Pork Include: 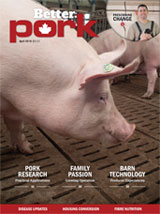 Beyond the Barn: Breeding Away Castration, Antibiotic Alternatives to the Rescue, Revised TPP Opens Doors for Pork

Prescribing Change in the Livestock Industry

How Does Pork Research Spell Success?